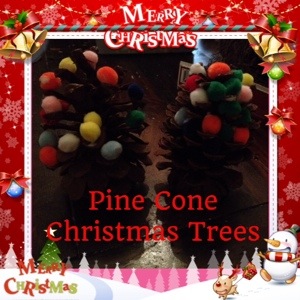 ‘Tis the season! We got our first snow last night, although it was just a dusting. We have been watching tons of holiday movies, and it really feels like the Christmas season! Last year at our PTA holiday party we made these Christmas trees, and they were a hit! They are easy enough for young toddlers to make, but fun for the older kids as well. Placing the “bulbs” on the tree are great for their fine motor skills! 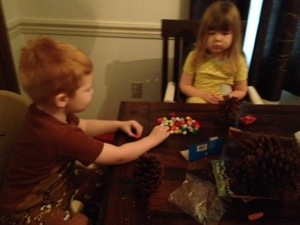 We bought a bag of pinecones at the craft store for a few dollars and I had the small pompoms in our school box, so it was an inexpensive and fun activity for the twins! You just dab a little glue on the pompoms and let the kids put them on the pine cones, super simple! It takes a little while for the glue to dry, so it’s best to let them sit for awhile before the kids play with them. We are thinking of hanging ours from the tree:)

What are your favorite simple holiday crafts or activities? We are always looking for new ideas!

Until our next adventure, 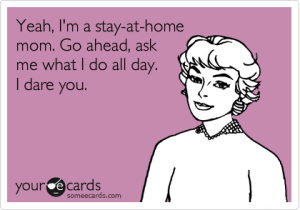 I’ve been fortunate enough to be able to stay at home with the kids since the twins were born. I can’t believe I have been out of the real world for three years! It has been really fulfilling and really, really difficult. Especially since we moved here where I have no support system. The majority of my day is spent talking about poop, pee, or cartoons, but I wouldn’t change a thing. Our kids are little for such a short time, and I’m blessed to be able to spend so much time with them and to teach them while they are young!

I watched a video on Upworthy the other day that was really cute. It was a little girl talking about her mom, and she called her a doctor, a chef, an angel, and some other things. I took the video as being about all moms, not just those of us who don’t work outside the home currently. Then I read the comments, which is always a mistake. One comment really got under my skin. It went something like…

All of you stay-at-home moms should go out and get a job and do something with your lives. You’ll be sorry when your husband divorces you for a younger woman and you don’t have rights to his pension or salary. Then you’ll have to get a minimum wage job and the taxpayers will be paying for your kids.

Seriously?? I’ve heard some of the stereotypes, but I’ve never really been witness to one. That blanket statement pretty much says
A) All men are jerks
B) SAHMs are lazy
C) Raising productive citizens isn’t “doing something with your life”
D) SAHMs are uneducated and unqualified to be anything but a Walmart greeter (and there’s nothing wrong with being a Walmart greeter!)

Most SAHMs that I know don’t plan on doing it forever, I know that I don’t. And even if I did, that wouldn’t make my value as a person any less than someone who works full-time. Raising kids is hard, whether you work or not, and being a parent is important. Everyone’s situations are different, but we all try our best to be good parents and that’s what matters. We are all in this together, shouldn’t we be supportive of each other along the way?

Personally, I think that failures are a difficult but very important part of our lives. Failing makes us work harder, and as children it makes us realize that in order to succeed we must put forth effort, that everything doesn’t necessarily come easy. BUT, it’s so hard to think of letting your child fail at something. I want to protect them from being hurt and disappointed, even when I know it’s not what is best for them.

When is the right time to stop protecting and let them fail? That’s what I struggle with. On a small scale, I let them do it all the time. Letting the twins climb the big kid playground or try the monkey bars is good for them, even though I know that they will probably fall a few times before they get it. Maybe even more than a few times. But none of those things are going to break my child’s heart.

There are soccer try-outs for a more competitive league on Sunday, and the thought of it gives me a horribly sick feeling in my stomach. I know that I should explain to Luke that it is a try-out and that he may not make the team, and let him decide whether he wants to do it or not. He enjoys soccer, but I think that it has more to do with the team aspect of it than the actual sport. I don’t think my husband wants us to do it, but his concerns have more to do with over committing Luke to too many sports in the spring.

I know that I’m being silly and some of you will think “suck it up, he’s in first grade”, I tend to agree. But it’s so hard! What are your thoughts on letting your kids fail? Would you let your young child try out for a team that he/she probably wouldn’t make?

I’d love to hear your thoughts! 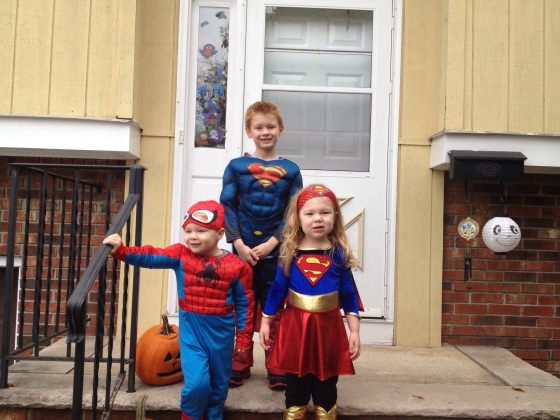 I hope everyone is having a great Halloween!

I think that we all have things that we struggle with as parents. None of us are perfect, and for the most part we do a better job than we think we do. That’s a good thing, because it means that we continue to strive to be better. One of the things that I struggle with the most is managing my time and trying to do too much. For example, last week I had a meeting, practice, or event every single night. It was annoying and stressful and by the end of the week I should have been riding a broomstick instead of wearing the Super Mom cape my wonderful husband thinks I deserve.

My life has been like this for several years, and I never change it. Each of the things I’m committed to I love to do, it’s just piling them all together at the same time that makes life crazy! Throw the CPA exam on top of it and I’m pretty sure it’s not good for any of us. My husband reminds me of this frequently:) When we first moved to New Jersey, I didn’t have anything to do and I hated it. I love staying home with the twins, but I need to get out of the house to keep my sanity! Once I had the opportunity to get myself and the kids involved in things, I was thrilled. Now I’m just trying to find a balance that isn’t too much but not too little.

What are the things you struggle most with in this crazy parenting world??

I read an article the other day titled Two Killings Do Not a Trend Make: Homicides Remain Rare in Schools. Seems ironic coming on the heels of two homicides in schools in three days, right? Statistically speaking, violence in schools is down from what it was thirty years ago. I think that statistics are valuable tools, especially for those of us who work with numbers. They make a lot of things possible that would not be otherwise. But statistics are not infallible, and they often do not tell the whole story.

Violent incidences in schools do not have to be reported. If they had to report every playground skirmish it would probably use an enormous amount of time and resources, not to mention it would make the school systems look bad. I get that, but it doesn’t mean I think it shouldn’t be required. What that means is that the statistics we have are from federal surveys. The schools can report what they want, which also means they are unreliable. Better than nothing, but definitely not perfect. I don’t disagree that certain types of violence are down in schools. I’m sure there are less fights on the playground than there used to be, because the punishments are more severe and it’s not worth it. But does that mean the schools are safer?

I certainly think that there is a difference between the type of violence that occurs in our world now than 30 years ago. Parents may have worried about fist fights, maybe they didn’t have to worry for their kids’ safety at all, but they certainly weren’t worried about someone coming in and shooting a classroom full of 6 year-olds. Because back then, it really was a rare occurrence.

Here’s some more statistics. The first mass shooting on record (defined as killing 12 or more people), was in 1949. It took 50 years for five more to occur, that’s a long time. The most recent 7 of the 13 total have occurred in the past six years. 4 of the 13 have occurred at schools (this includes universities). There are others, with less fatalities as well. 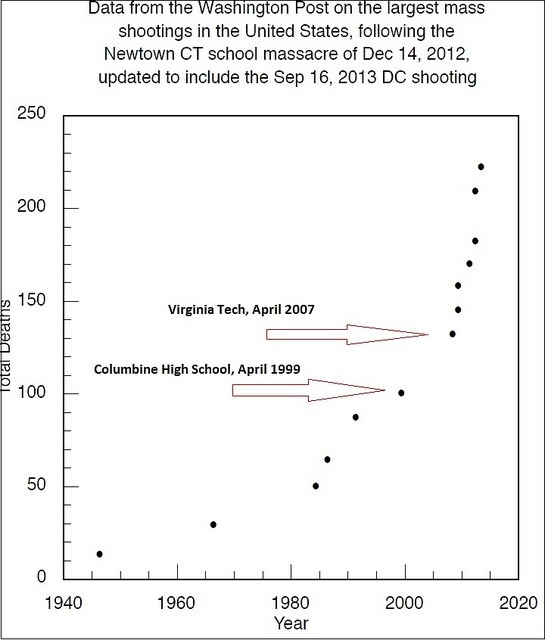 This is why I’m sometimes afraid of sending my kids to school. I realize that these incidences don’t happen everyday, which is why I still send my kid to school everyday. Living in fear of what could happen isn’t good for them. But the fact is, this horrific type of violence does happen, when before 1999 it didn’t.

So what do we, as parents, do about it? Hug our children tightly, love them with all we have, and get them help if they need it. Other than that, I haven’t the slightest idea.

There was an error retrieving images from Instagram. An attempt will be remade in a few minutes.

A faith and culture Mommy blog, because real life gets all mixed together like that.

Simply good from my kitchen to yours!

Taking Life Back to the Basics

My Dance in the Rain

The journey of my life, my path to redefine myself and a special little girl with Cri du Chat Syndrome and Primary Ciliary Dyskenisia who changed it all.